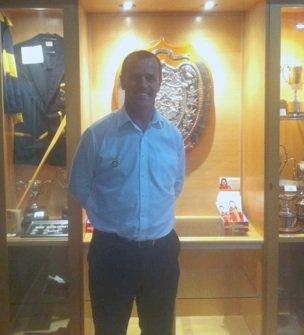 Extracted below is the text of the induction speech given by President Robert Speakman to mark the occasion.

Darren started playing lacrosse with the Glenroy Lacrosse Club at the age of 14 along with his brothers Cameron, Jamie and Scott. Darren tried out for the Victorian Under 16 team twice but to no avail. He was Captain of Glenroy’s Senior team from 1984 to 1991 and was named Best and Fairest in 1983-88-89-91.  Darren went on to represent Victoria in Colts (Under 19) in 1980, the Victorian Senior state side in 1985-87-88-89-91, making the Championship All Stars 1987-88-89-91. Darren represented Australia at a pre-Olympic tournament in Los Angeles in 1984 and at the World Series in Toronto 1986, Perth 1990 with brother Cameron also in the team.

Darren went on to coach State League for 3 years for 3 premierships (2008, 2009 and 2010). After playing and coaching State League Darren has coached & played for Williamstown’s Division 1 and Division Two teams. Darren has also coached many of our Junior teams and umpired man, many Junior games.

Darren has been an active committee member since joining Williamstown and is a member of the Lacrosse Victoria Junior Sub Committee and in the 2012 season took on the role of our Junior Coordinator  at Williamstown helping the club to get many more parents involved with the club and to revitalise our Junior recruitment program.

When Darren came to Williamstown we also inherited his Father Doug (known to most as ‘Hoot’). Hoot took on the job of team manager of State League. Back in those days we did not have team drink bottles so Hoot used to mix up the cordial in a plastic bucket and had about 6 plastic cups, these used to be thrown back into the bucket complete with grass, by ¾ time there was more grass than cordial in the bucket!

Darren has had a very distinguished playing and administrative career and we hope to see Darren, his wife Lauren and boys Callan and Harry around the club for many years to come.

Congratulations Tinka! You are a very worthy Life Member.

This club is significantly in your debt and we are all better for your efforts.