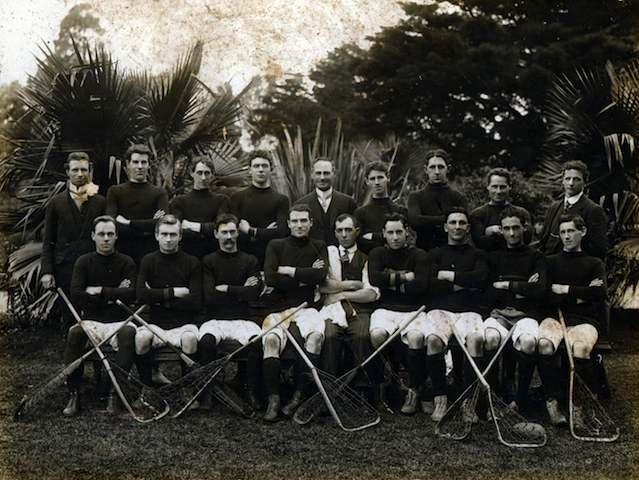 Early in 2014 the Williamstown Lacrosse Club committee commissioned a portfolio to research, interview, write and gather items on the history of our lacrosse club that was established in 1898. Long time player, coach and committee member, Damien Orr, who has recently returned to the Club after many years following lacrosse and life around the World was appointed as the head of this important historical project. Damien has uncovered some incredible information via national archives and from other more local sources.

The information set out below is written  by Damien in summary of some of his early findings.

If you have any historical information about the club laying around, please let us know by email at: contact@williamstownlacrosse.com.au

It still seems a little daunting to go back all those years and see what we can come up with, but with a little help from friends we have managed to uncover some lost treasures and even learn things we didn’t know about our past.

Our very first game was against Essendon Lacrosse Club in 1898 and the first goal thrown for Williamstown was by a player on loan for the day from the opposition club. Williamstown went on to win the game and such seemed the enjoyment of the sport that the founding members joined in the Victorian Lacrosse Association and kicked off the club’s inaugural season in 1899.  As the first project we uncovered as many newspaper articles as we could about the 1899 season and it has been on display in the club along with a photo of the first team.

The next move was to interview two of the oldest members of the club in Ken Speakman and ‘Pud’ Martin. Ken’s interview has been recorded along with conversations with Ken and ‘Pud’ as they delve over some of the old photographs in the club. All should be available on our website over the summer.

Future projects on finding out about and addressing our past will be to uncover some stories from the men who lost their lives serving Australia in the ‘Great War’ of 1914 to 1918. There are 40 or more names on the list and it will be a challenging but rewarding project to see if we can gain some understanding of who these men were and where they are buried. Some follow-up on current living legends and their and our on field triumphs will very much be the focus of our tradition rich club in the coming months.

Some of the projects we will be looking at are: film archive of our games, Captain Fearon’s biography, 100 years since ANZAC day-the lacrosse clubs ANZAC’s, WLC history almanac, World War II honor board, past Australian players, photo collection and restoration and the list goes on……