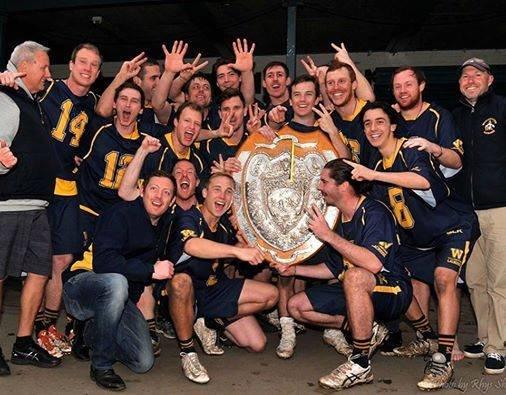 The stirring win was the culmination of a challenging year for the men in the Gold and Blue. The side was plagued with injuries to key personnel and prolonged player absences due to representative duties which tested the club’s on-field depth and off field resilience. Coach Damien Orr called upon 37 different players  – including several juniors, State League rookies and retired veterans – to extend the side’s streak of making finals to 58 years.

The adversity however was not without windfall. Seventeen year olds Cal Gibson (12 games) and Lachlan Russell (10 games) grabbed the opportunity to play regular senior lacrosse and eventually cemented their places in the team. By doing so they collected their first state league premiership medallion alongside 20-year State League veteran  Kyle Morlang who played in four premierships with Cal’s dad (Fearon legend Darren), from 1998 to 2001. It was Morlang’s 10th State League premiership.

The run into finals

In the regular season finale, the Fearons were completely dismantled by a formidable Surrey Park outfit on a cold day at Mont Albert. The loss dropped the Fearons from first place to third going into the first week of finals and in doing so the team surrendered a double chance. From here, every game would be ‘do-or-die’.

The opponent in week one of finals was Camberwell, riding high having made their first state league finals series in many years on the back of a thrilling one goal victory over Malvern. Camberwell had taken it right up to Willy in their round 16 clash where the Fearons came away with an unconvincing 14-10 win.

The humiliating loss to Surrey Park appeared to ignite the Fearons. After Camberwell stuck the first two goals of the game with diving efforts low on the crease, the Fearons piled on the next 7 goals with midfielders Ben Newman, dog-loving import Paul ‘Big Strawberry’ Werner (Gettysburg College, USA) and attackman Kade ‘Ding’ Robinson taking charge. Camberwell would score only one more goal as the Huw ‘Hefner’ Wilson led defense closed shop on the Chiefs. Only some outstanding keeping from Camberwell’s goalie Sean Aaron kept the game from being a larger blowout .- Williamstown cantering to a 13-3 victory. The only downside on the day being a calf injury to long-stick defender, Josh Robinson. This was offset by the laugh of the season, when the Big Strawberry infiltrated the Camberwell pre-game huddle in search of a cuddle from a friendly pooch.

Round two of the finals saw a match-up with Surrey Park for the second time in three weeks. With Josh Robinson’s calf injury proving too much to overcome, the team called on captain Jason ‘J-Mac’ Mackinnon to make an inspirational return to the field after badly breaking his collarbone early in the season.

The Fearons picked up exactly where they left off in the first week of finals. Newman exploded out of the gates with three goals in a dominant first quarter, Noah ‘Noj’ Jenney and Sean Clarke controlled the face-offs and the defense blanketed the Surrey Park offense, holding them scoreless.The game turned into a mirror image of the previous encounter and was effectively over at half time with the Fearons holding a commanding 8-1 lead. The score would balloon out to 11-1 before late consolation goals to Surrey resulted in a 12-4 final score line.

With the win, the Fearons progressed to the Grand Final for the second time in 12 months. Their opponent would again be last year’s runners-up Footscray, the form side of the competition whose high-powered offence had powered them to 12 wins on the trot (averaging 16 goals per game). For Footscray, it would mark their 4th successive appearance in the title game.

Coaches and selectors staff faced a difficult week at the selection table with the prospect of returning captain Matt Price and Josh Robinson from injury. Neither would come up for the big game and the team went into the final match of the season unchanged with Clarke and Mackinnon leading the way as captains.

The first quarter was an even affair, with play going up and down and both defences turning the ball over numerous times. Werner opened the scoring for the Fearons, finding the net with two big outside shots past the Footscray keeper’s feet. At the other end Footscray forward Peter Kwas put away two shots on broken plays to take the teams into quarter time at 2-2.

The second quarter saw Jenney and Clarke work their way on top of Footscray veteran Luke Jacques at the face-off ‘X’. With more time on possession and controlled ball movement the Willy attack generated lots of good opportunities putting Footscray’s defence to the test time and time again. Willy managed to net 4 goals to Footscray’s 1, taking a 3 goal cushion to the break. Goals came via Pike, a calm finish by Troy ‘Peckerhead’ Butson and two long-range blasts from Newman.

The third quarter was a defensive struggle with both sides again having chances to score but for unforced turnover errors, shots hitting pipes and easy lay-ups being squandered. Willy managed to increase its lead on goals from Werner before star Footscray import Mike DeNapoli scored off a transition play. Butson calmly slotted his second taking (assisted by Werner). At the final change it was an 8-4 lead to Williamstown.

With the game on the line, Willy found another gear. Within the space of a few minutes, a goal to Pike off a dodge and a pair of poised finishes from Murray broke the game open and gave the Fearons a seven goal lead. Footscray would not surrender, and their talented attack line found some rhythm through the middle stages of the quarter to score 3 unanswered goals. Any chance of a miraculous comeback was snuffed out shortly after – when Newman blew past two Footscray defenders after a time out to blast home from close range.

Williamstown’s evenness and depth across all aspects was telling in the end – simply having too many contributors on both sides of the ball for their opponents. Special contributions were made by game MVP Paul Werner and season MVP Ben Newman, while injured captain Matt Price proved a calming figure on the sidelines alongside Coach Orr.

Photo Album of the game here courtesy of Lacrosse Pix.